Today was a bit of a short one. We didn't arrive in Narita until 2:45pm and by the time we got through customs it was close to 3:45. To get into Tokyo we'd decided to take the Narita express. It was much quieter and much more comfortable than the airport limo I'd taken on my last trip. It's also much more scenic. Where the bus travels on highways that mostly have sound barriers to obscure the view, the NEX allowed us to watch the "countryside" on the hour long ride to Shinjuku. There's some lovely little tori gates that are only just visible in the forested areas. A also had his first taste of Japanese food. We bought and shared a Pork Katsu sandwich from the trolley lady who bowed between each carriage.

After some confusion about transitioning to the Metro line from the JR station we reached E Hotel Higashi Shinjuku. It's on the outskirts of the Shinjuku area but it only takes a couple of minutes to walk to Kabukicho. Kabukicho used to be swampland and was originally meant to have lots of Kabuki theatres hence the name. WW2 changed all that and it was redeveloped into an entertainment and red light district. It's more entertainment than red light though with hordes of business men coming from work out to have a beer and let off steam with karaoke.

Our goal for that night's dinner was a tempura restaurant named Funibashiya Honten. Walking through the door we were greeted by a friendly old man waiter who gave us seats at the counter where we could watch the chefs working. We were presented with an English menu and a tray with green tea, pickles and grated radish. Both of us decided to start with the set menu. Mine was smaller with 7 pieces of seafood and vegetables of the chef's selection and A decided on the more expensive 8 pieve set (this also had higher priced ingredients). Sets came with rice and a beautifully salty red miso soup with tiny, weeny little clams that A was determined to eat. 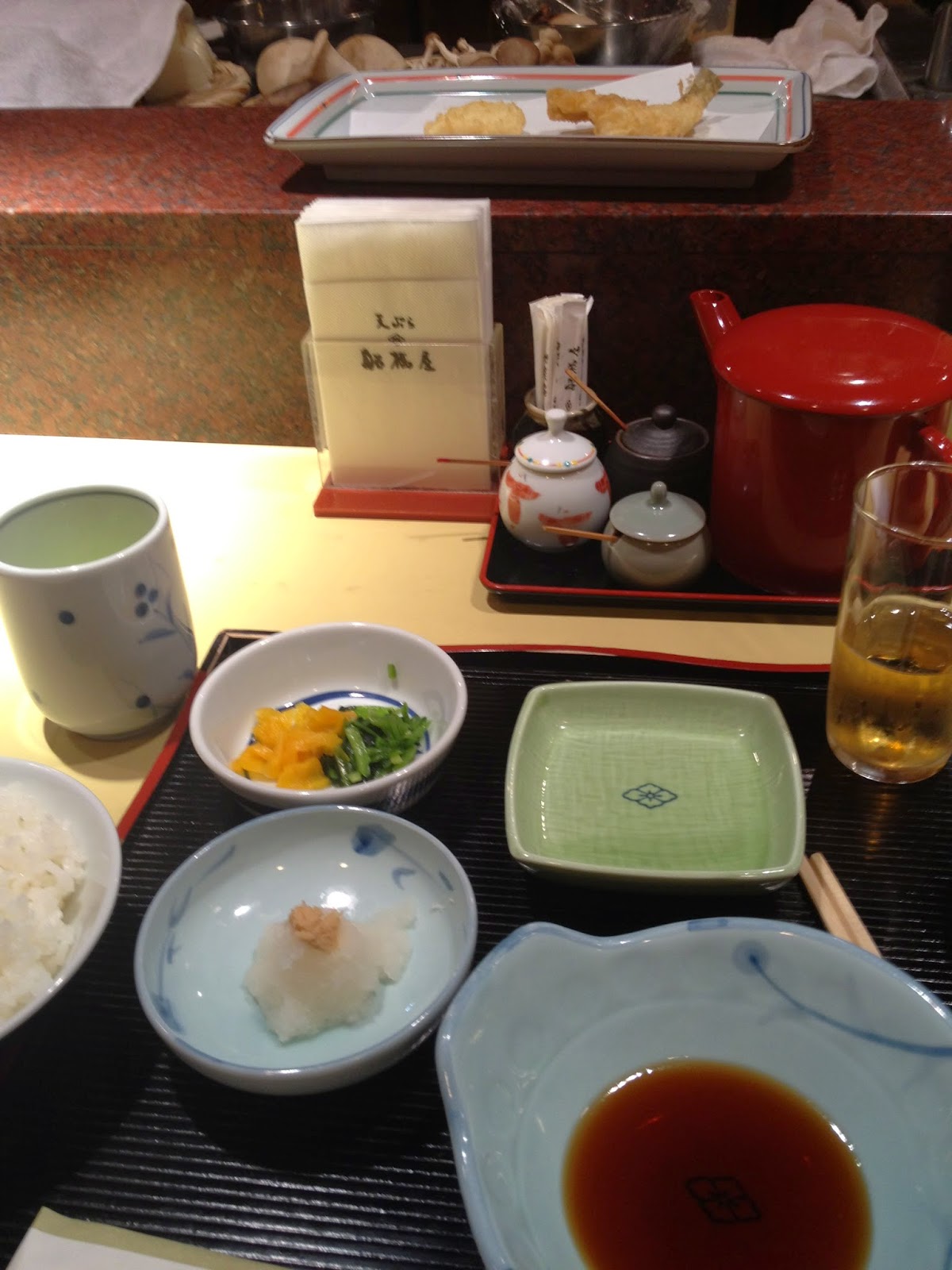 Drinks were a bit of an ordeal. Both of us wanted a bottle of Kirin beer but the waiter was doubtful we'd be able to drink two. He was determined to explain to us that they were big bottles and "maybe we'd want one with two glasses?" I think he underestimated us as Australians because we happily sipped our beers until the end of the service while the man next to us downed shot after shot of sake.

Both sets had extremely tender prawns, whiting, calamari and a prawn kakiage. The vegetables differed between the two of us and A got additional types of fish. As each piece was cooked fresh and placed on a piece of white paper in front of you we couldn't take pictures of the whole set without it going cold. The mark of good tempura is how little oil is left on the paper. Let me say that there was hardly any oil on that paper even when a piece had been sitting there for a while. 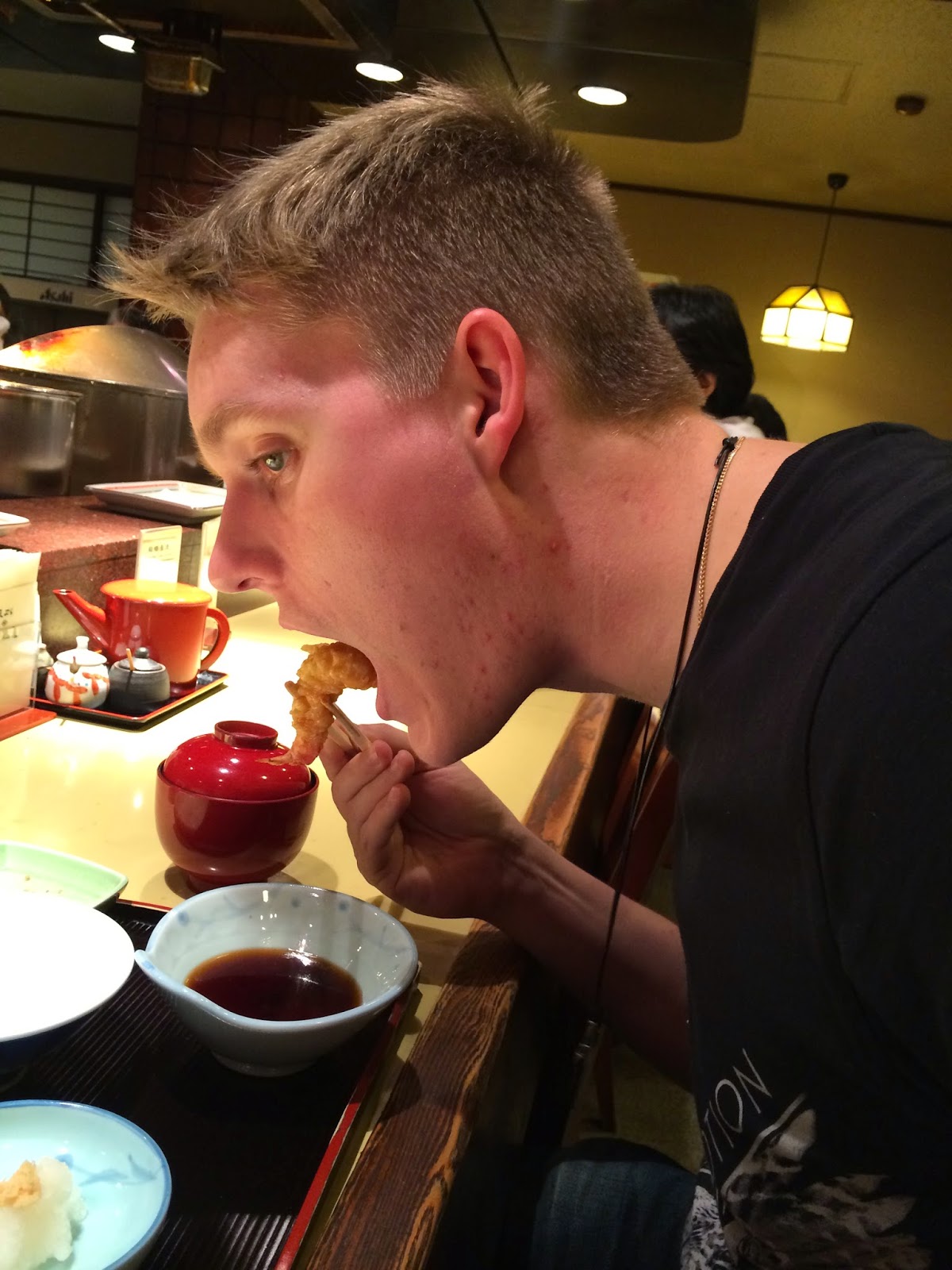 While we were watching the chefs, he had gotten a sieve and was fishing around in an esky with it. Out of it he had scooped a handful of squirming, live little fish or eels that he set to the side. They kept trying to escape over the side and he'd have to stop whatever he was doing and pick up these little things off his chopping board every few minutes. Eventually he was fed up and battered them and fried while they were still moving. A was determined to try it. Thinking they were little eels we pointed at the eel option on the menu to the friendly waiter who translated to the chef and waited.

It was not little fish/eels. Instead the chef fished out a live 30cm long river eel. He then killed, gutted and filleted the creature in front of us and passed on the meat and the spine to the frying chef. The whole time the waiter was standing behind us snickering his little old head off at the sight of our stunned faces. Seconds later the eel was placed on our white paper and the chef watched us we took the first bites. The flesh was amazingly soft and melt in your mouth. A and I were never eel fans back in Australia but I think this made me a convert. There was the slight aftertaste that I can only describe as pond pond but surprisingly this was not bad but merely made the eel seem more fresh. A ate the spine because it was only big enough for one and described it as tasting surprisingly similar to pork crackling.

That was pretty much it for the night. We wandered around and people watched before heading back to the hotel for our first night in Tokyo.
Posted by Chase at 06:55